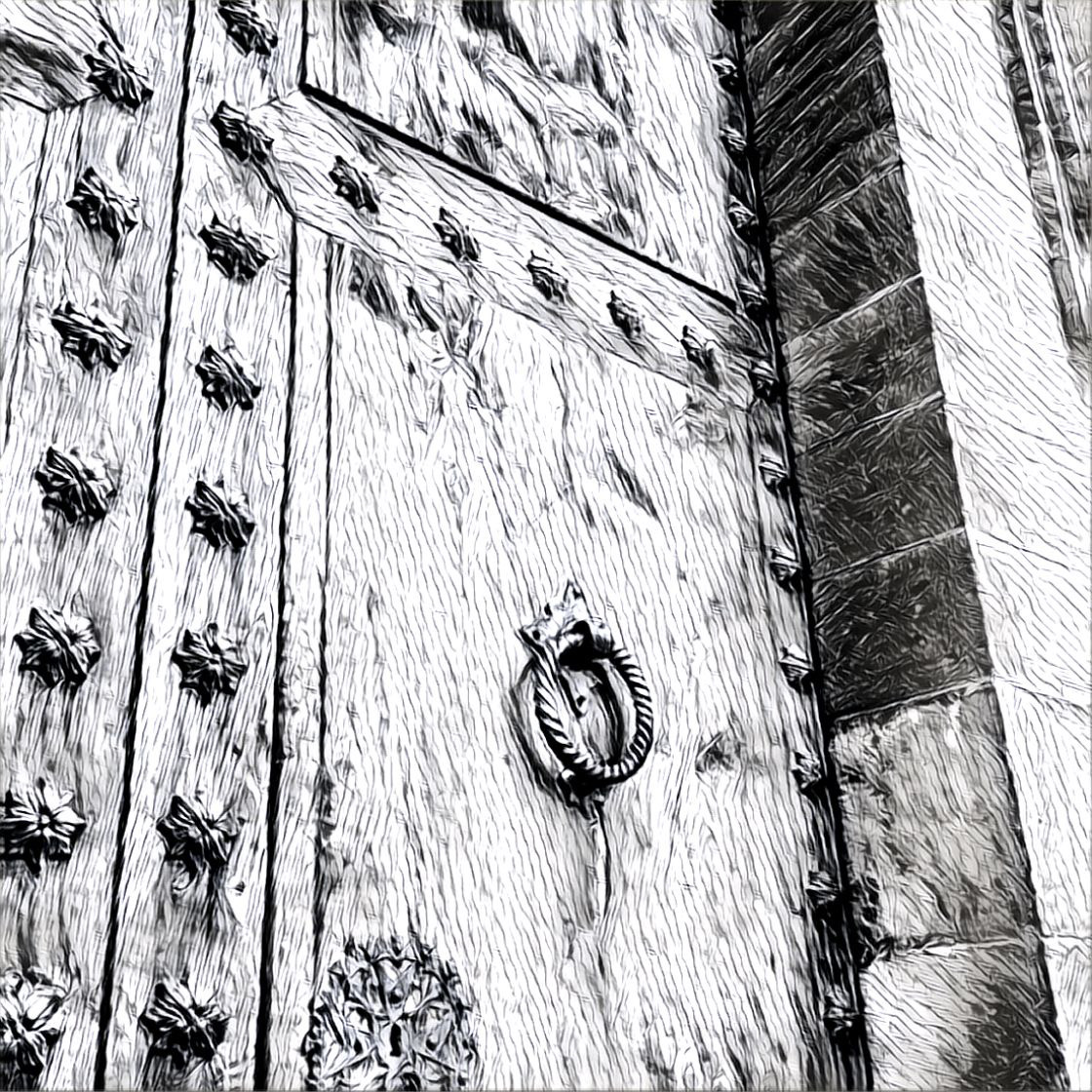 Home / Letters from an Unknown Land / Story: Growing In Stone

Letters from an Unknown land is a series of stories about a world of fallen empires, magic, war, and power. Told through journal entries and letters written by travellers to their patrons, the story, place, and characters emerge piece by piece.

In this instalment, the traveller, Kalik, finds shelter in a house reclaimed from the dead.

‘You will sleep well here. That’s a guarantee.’ Anjray makes both statements with a note of fierce pride. For my part, I’m not so certain. Standing in the main room of the house, both the damage of cataclysm and time are visible under a layer of repairs. There is fresh mortar in a crack that runs across the wall above the door. The burn shadow runs across the back of the house, the red marble of that face bleached to pink. A stick of incense burns in a pot of sand by the stairs. Someone has taken a chisel and hammer to the faces on the pillars. There has been effort made, but something in my face must have said that I was less than keen on the idea of spending a night here. ‘I burnt the seeds myself,’ Anjray adds, pointing to the blackened husks on the floor. They are supposed to placate any of the dead, who might not be as welcoming as my host.

Anjray is a banisher, the fourth in a family where it’s been the business since his father came up the road from the drought in the south. He is twenty summers old, sincere, well dressed, and confident, and that confidence goes some way to reassuring me that I can spend a night in this house of ghosts and see the dawn intact. Sleep might be a hope too far, mind you. But there are no alternatives unless I want to spend the night in the open on the edge of the city. Given the number of feral dogs and scavenger beasts out there, it’s not a real choice. Any traveller that can afford it takes their chances with the dead over the hungry jaws of the living.

The city of Sentiri is the last still intact on the coast. With Ilitiri and Molati in ruins, and the land between them scoured to silver and white sand, there is only one place left for people to go. Sentiri is that place. The new inhabitants of the city are barely a generation deep. They are the children of fishermen, of farmers, and road layers. The villages they came from are out in the dust now. The stones of this city are the foundations of their hope. They just need to deal with the past first.

There are tens of thousands living in Sentiri now. If you walk down the streets between the houses you could be forgiven for thinking that it has always been this way. The smell of excrement and urine baking under the sun wafts from breaks in the newly dug sewer channels. The shouts between walkers and cart drivers follow a rhythm as old as man. There are herbs hanging outside most doors, and the smell of the drying leaves catches on the breeze to stir with all the smells of a bustling city. It is that, but you can’t forget for long that you will sleep that night in a house that belongs to the dead, and that at its centre is a burnt hole where another city once stood.

The house where Anjray lives is a cinder-house, one of hundreds spread in districts across the hills outside the scar where old Sentiri stood. Two storeys high, it has all the grandeur of a palace written on a small scale. The steps outside curve above support pillars shaped like the hounds and cats that guide the departed to their place in the never-after. The doors are charred wood with brass handles – dogs’ heads of course. Once you are inside, a wide stair whirls you up onto a landing with carved banisters: dogs leaping from fig tree wood. Then there are doors. Three doorways is the tradition: one open, one closed by a door with three locks, and the third sealed by stone so that it is a wall framed by an arch. The doorways are where you get the first real sense that the needs of the living have replaced the traditions for the dead. Painted wood closes the open doorway. Someone has removed the three locks, and replaced the stone door with painted wood on smooth-turning hinges. Low tables, cushions, and rugs fill the spaces beyond. The cinder boxes have gone.

‘We bury them,’ says Anjray when I ask. The boxes hold the remains of the fires used to burn the dead. Any bones amongst the cinders would have been removed and thrown on the middens on the outskirts of the city. The souls of the departed do not cling to bones, or so the people who built the cinder-houses believed. I ask him where they bury the boxes.

‘In the scar,’ says Anjray. I ask how far in they take them into that part of the ruins. He is not comfortable to answer fully, but says something about far enough, and then goes on to show me the details of the sleeping arrangements.

The ‘scar’ is the area at the centre of Sentiri where the fiery cataclysm killed the city. For two nights and days a column of fire burned from sky to ground. When it vanished, the heart of the city was a blackened pit. Charred blocks teeter on the edge of the wound. Nothing grows there, and the rain gathers in black pools at the bottom. The heat of the fire did not burn anything outside the circle of the inferno, but it sucked the air in from miles around and bleached colour from stone, leaves and wood. Nothing that breathed survived. Even now, the new residents find desiccated bodies amongst the outer ring of buildings. But it’s the ghosts that worry them more than corpses.

For most of the people who have made Sentiri their home, the idea of desecration is foreign. The cinder houses may have been made for the dead, but they do not belong to them. The wishes of the original makers are similarly put to one side without a thought. It’s a much more tangible fear that gives Anjray his trade.

‘People lose things,’ said Anjray when I asked him what happens when the ghosts come. He does not mean a bowl of fruit or a few coins either. ‘Memory, health, those they like,’ he said, and then adds a story about a woman who moved into a cinder-house without appeasing the spirits. ‘Within a week she had lost her name. Just her name, mind you. Some of her family tried to get her to leave, but she wouldn’t. Another two nights and the feeling in her fingers was gone. Then she forgot who her second son was. By the time her family got her to leave, she could not remember the town where she was born and she was starting to go blind in her left eye.’ It’s the sort of story to give you pause while eyeing the sleeping rugs and perfectly folded blankets. Anjray clearly does not see it that way; that will not happen here because he has taken care of all the necessities.

It might be tempting to see these stories as part of the sales patter – something to fear so that you are eager and grateful for the services of a banisher. That would be comforting, but spend time with anyone from the reborn city and you will hear similar. The hunger of the dead for the living is real. Business for the banishers is booming. They are the reason that there is a city here at all, rather than a silent ring of tombs around a crater. But they are also the emerging authority in the city. What they say goes. If someone can’t get a banisher to mark a building as safe, then no one is going to live there. I have also heard quiet rumours that they are the reason that people have not built more new structures. A new building does not need the dead soothing before people feel safe to enter it. There will be a natural limit to the banishers’ growing power. At some point, if the city keeps growing, they will run out of empty cinder-houses. Anjray does not seem worried that he is going to be out of a job.

‘Sometime and perhaps,’ he says with a smile, until then business is good. ‘After I am amongst the dead, my children, or their children might not need someone like me. Until then…’ he smiles and gestures at the building around then. ‘Until then we all need somewhere safe to rest.’ The wind stirs the hangings over the doors, and outside the sun is falling and twilight growing amongst the cinder houses.

If you have enjoyed it please subscribe to my email list and be the first to get new instalments and extras.