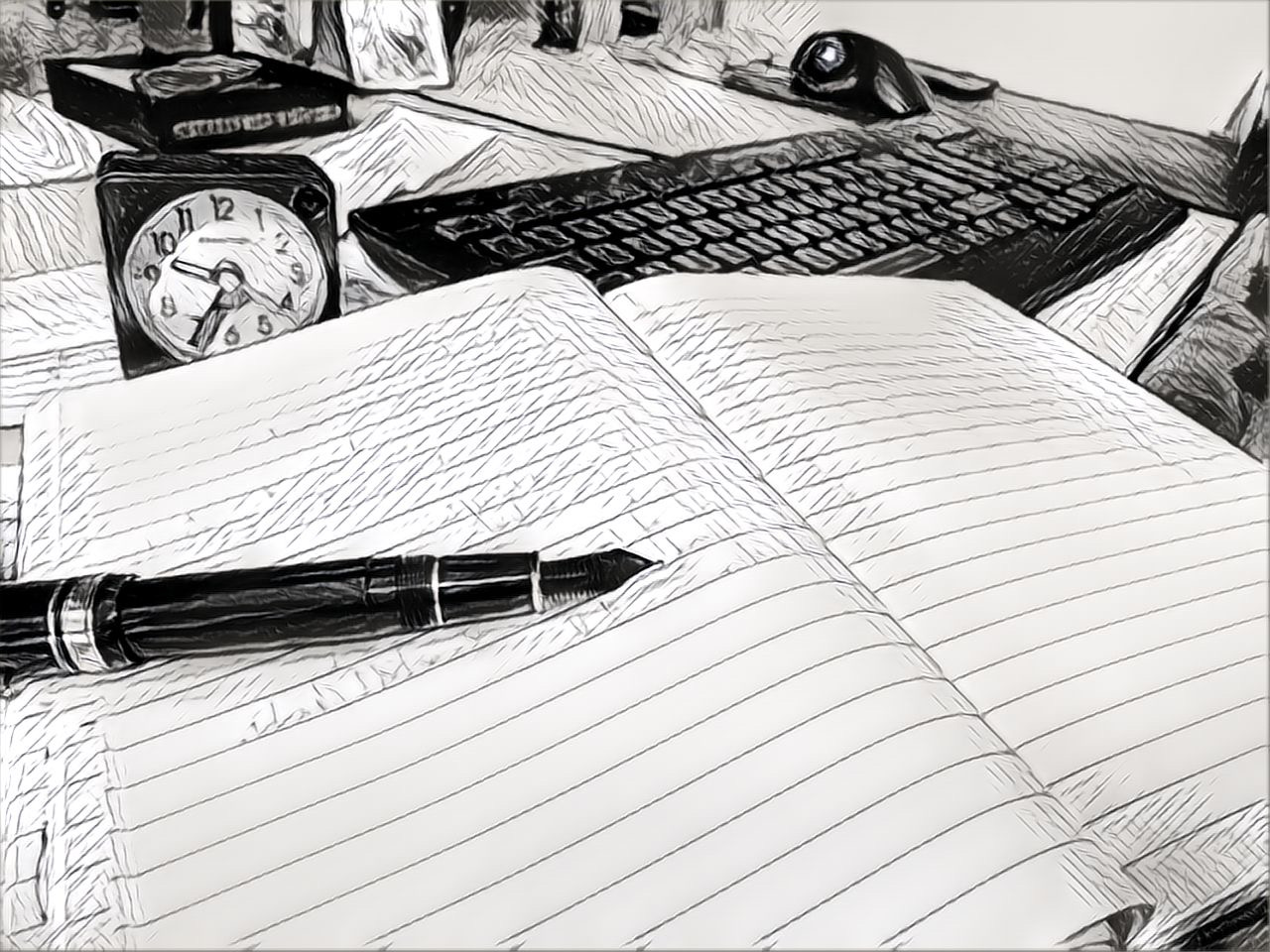 Home / How to Write – How to Create / Build Your Routine

To create, you need to build a routine. To create that routine you need to look at your time. Start small, and then build, until your routine takes the place of motivation.

It’s 4am. Haruki Murakami has just woken. With the day in its earliest hours, he begins work on the novel that he is writing. After five hours or so, he will stop. When the morning crosses into the afternoon, he will go for a run or swim, or perhaps both, crossing ten kilometres of ground and moving through fifteen hundred meters of water. After this he will read and listen to music, before lying down to sleep at 9pm. He will do this again tomorrow and the day after, until the days pile up into months and the novel is finished.

If you read about writers then this type of account of a day appears again and again. The details vary, but the features remain: the particular time, even if those times vary, the chosen places, the little rituals and wrinkles of habit. Murakami’s routine has a hint of austerity to it, like the account of how someone scales a mountain or crosses a desert. That’s a fact he acknowledges, saying that ‘to hold to such repetition […] requires a good amount of mental and physical strength. In that sense, writing a long novel is like survival training.’ But underneath the details lies a truth worth taking to heart:

If you want to write, or to create anything, you should build a routine.

At its simplest, a routine is a pattern of action that you follow repeatedly. For a writer and creator, its when you do your work, and how you structure your life around that work.

Why you need a routine

It’s easy to reject having a routine. An unstructured approach, where we work when seized by inspiration is so much more appealing. We like the idea of moving through a creative life like a feather on a breeze. We wait, passive. It’s inspiration’s job to come and give us the permission and fuel to make something. It also means that we never make anything, never fail, and never learn.

Routine gets us past the passive approach. As Faulkner is said to have put it: ‘I only write when I am inspired. Fortunately I am inspired at 9 o’clock every morning’. It’s a great line, but it would be more accurate to say ‘I don’t wait for inspiration. I work and if inspiration turns up then great, but I am not going to wait.’ You keep office hours for the muse. You turn up, open the door, start work and maybe they will drop by. Waiting for them to find you is like wandering around a city hoping to bump into one person.

Motivating yourself to work can be hard. Across hundreds of days the chances of the most enthusiastic person finding themselves lacking the will to go another round with their work is high. Having a routine removes the short term weakness of will. It takes care of itself, you just have to turn up and let the well-worn habits take over. You don’t feel like writing but once you have a page in front of you and have typed a word, the next word follows, and the next. A routine can be thought of as an engine that, once started, runs smoothly and powerfully, carrying you up the slopes and through the troughs of creating.

How to make a routine your own

It’s not the same for everyone and neither should it be. No two routines of successful people are the same, because no two people are the same. It’s about having a consistent pattern of action that supports creating. The remains of discarded routines litter the road of creativity. The reason is simple; they don’t fit. A routine is a tailored piece of life technology. You have to build it and you have to adjust it. If you do that, you have a much greater chance of sticking to it than you would normally. All very well, but how do you do that? Here are the best places to start.

A routine is a pattern of time. At its simplest, it is when you work, or more exactly when you start work. ‘I always start writing at 9am,’ is a routine. The detail of ‘start work’ is important, as will become clear when we start talking about starting small. Now, before you fix on a time to start work, there are two steps that you should take.

First, write down when you can work. For most of us, the day is not an empty space that we can fill how we choose. You might have a job with fixed or variable hours. You might have children and family that you want and need to spend time with. Then there is the fact that to work well, the human mind and body needs rest as well as work. You will know when you can work. Write it down.

Second, reflect on when you work best. You will know when this time is. It’s the time when you can settle into what you are doing: when the hill of effort you have to climb seems lowest, and the thoughts in your head are both clear and smooth. For some people that time is in the lull of night, after everyone else is asleep. For others it is just after they have woken up while the blur of dreams still seasons their thoughts. For me, its in the morning as I drink my second cup of coffee. When ever it is, this is the time you should aim to work in. Now all you have to do is compare the times you can work, and the time that you work best. You are looking for the sweet spot between the two.

Now, let’s be honest, there is a better than average chance that you are going to to find that the best time for work is not when you can work. If you are lucky enough to work best at 8pm and that time is free, then great. It’s just possible that that is not going to be the case.

Nobel Laureate Toni Morrison once said that ‘writing before dawn began as a necessity. I had small children when I first began to write and I needed to use the time before they said, Mama—and that was always around five in the morning.’ The afternoon swim and run of Murakami is not a fit for Toni Morrison, and she is working early because that’s the time when she can work.

Unless you have the freedom to sculpt every part of your life, then that is to be expected. Try and get as close as you can to the best match. If you can make small changes in other areas of life to give yourself a better work opportunity, do it. If the only time that you can work is not ideal, that’s the time you work.

When you are building your routine, do not do what we all do, do not create a series of large tasks that you say you will do regularly. Why? Because you won’t do them, and the routine will die and fail, withering before it has rooted into your life. ‘I will write for 3 hours from 5am every morning’ sounds good, but unless you are writing for hours in the morning already, you are asking yourself to do more than you have done before, at a time that you haven’t done it. The most likely outcome is that you will struggle to make it stick, and if you don’t do it every morning for 3 hours having started at 5am, you will feel like a failure. You will stop. The power of a routine is in the way it has its own momentum which carries you through struggles and dips in energy and motivation. It propels you forwards without you having to put extra energy into it. If you overload your routine when you start it, then it will never reach that point. So, you make the demand of your routine small. ‘I will start writing at 6am’ is much easier to stick to and make a habit. All you need to do is turn up with a notebook or at a computer screen. If you work for 5 minutes or 5 hours you still hit the mark. Once you start you will do more work than you would think. Starting is the difficult part, so make that as easy as you can.

Then you just need to let it become a habit. In my experience, it takes three weeks to make something a habit. That’s the time where you will have to remind yourself about it and apply some willpower to make it happen. Of course, it might take a little more time. Stick with it. After a while the willpower and reminders drop away, and the routine is just what you do.

Give it time and then revise

Once you have got your routine going it’s a good idea to look at it again. A routine is like an engine or a computer – it does a job and every part of it works with the rest. It can be refined, overhauled, made more efficient, more powerful. Small improvements can make a big difference. If, for example you sit down to write on a tablet every morning while you have your first coffee, making sure the tablet is in front of your favourite spot at the kitchen table makes the move from sitting down to writing smoother. Maybe you find that the time you picked to start work is not as good as you thought – if so, change it. Continually assessing and improving your routine will mean that it becomes not just a way of making sure you work, but a way of powering that work. It’s also fun. The routine is the structure of your life, its bones, its scaffolding, it supports us as we grow and build our creative lives, but it also grows and changes.

And about the Toni Morison here